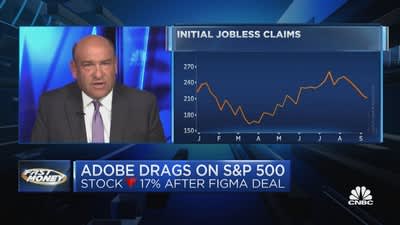 Shares of FedEx plunged 19% after the shipments company withdrew its full-year guidance and said it will implement cost-cutting initiatives to contend with soft global shipment volumes as “macroeconomic trends significantly worsened.”

The three major averages were on pace to notch their fourth losing week in five. The Dow Jones Industrial Average has declined 3.70% this week, while the S&P 500 is 4.08% lower. The Nasdaq Composite is down 4.62%, headed toward its worst weekly loss since June.

Traders are concerned that markets will retest June lows after a surprisingly hot reading in August’s consumer price index report indicated an increasingly difficult pathway to bring down inflation by the Federal Reserve.

“They might have a hard choice to make,” iCapital’s Anastasia Amoroso said Thursday on CNBC’s “Closing Bell: Overtime.”

On the economic front, traders are expecting the latest consumer sentiment data on 10 a.m. ET Friday.