Saudi women excel in hotel management after training in Europe

JEDDAH: Relentless economic development, accompanied by agricultural and industrial expansion, the extraction of minerals and fossil fuels, and improved health and nutrition, has led to a global population explosion.

This in turn has resulted in the encroachment of urban areas such as cities and towns into previously uninhabited lands and animal habitats.

While living standards have risen over the centuries, the upward trajectory of unsustainable development has placed a heavy burden on the world’s ecosystems, with carbon emissions, deforestation and the overexploitation of land and fisheries causing untold harm to plant and animal life.

According to the World Wide Fund for Nature’s biannual Living Planet Report 2020, about a million animal species face the threat of extinction in the coming decades, with potentially catastrophic consequences for pollinators and our food systems.

But as the efforts of Saudi Arabia show, the picture is not uniformly bleak. From the rugged mountains of the Hijaz and the lush green oases of the east to the wide valleys and vast desert plains that make up 30 percent of the country’s land, the diverse landscape is home to a wide variety of flora and fauna.

To preserve this wealth of biodiversity, authorities in the Kingdom have devoted considerable resources to conservation efforts, including funding for projects designed to protect threatened species and expand nature reserves, preventing further human encroachment into vulnerable habitats.

Saudi Arabia spans the majority of the Arabian Peninsula but is among the world’s most sparsely populated countries, allowing it to set aside vast tracts of land as protected wildlife preserves, safe from urban, agricultural or industrial expansion.

These efforts date back to 1978, when Saudi authorities set aside an initial 82,700 square kilometer area to protect natural habitats. In 1986, the Kingdom established the National Commission for Wildlife Conservation and Development to oversee conservation initiatives.

One of the first species-specific programs it launched was a captive-breeding project for Chlamydotis undulata macqueenii, better known as the houbara bustard, the population of which had dwindled as a result of overhunting and changes in land use.

Poaching, falconry, unregulated hunting, overfishing, overgrazing and habitat loss all contributed to the bird being classified as “vulnerable” on the International Union for Conservation of Nature’s list of endangered species.

Several long-term breeding projects were initiated to build a self-sustaining population of houbara within a network of managed sites and prevent local extinction. The Prince Saud Al-Faisal Center for Wildlife Research succeeded in hatching its first houbara egg in 1989.

Two years later, the center had bred sufficient numbers for them to be released in the Mahazat as-Sayd Protected Area. In the first two years of the project, the center bred more than 2,000 houbaras for release into the wild.

Building on monumental work of the center, the Imam Turki bin Abdullah Royal Nature Reserve Development Authority announced in August this year that it had launched its own houbara breeding center to help replenish local populations.

As part of its ecological protection and restoration efforts, Saudi Arabia has mobilized environmentalists, scientists and special task forces to collaborate with international bodies, including the IUCN, and develop plans for its nature reserves.

Sanctuaries have been created to protect the region’s endangered species. Many of them combine conservation work with the development of ecotourism and public recreational spaces.

Currently the National Commission for Wildlife Conservation and Development manages 15 protected areas, and proposals to grant protected status to 20 more reserves are under review.

An additional 40 areas are managed by other entities, including the Ministry of Environment, Water and Agriculture, the Ministry of Municipal and Rural Affairs, neighboring countries, and the royal commissions for Jubail, Yanbu and AlUla, among others.

The Prince Saud Al-Faisal Center for Wildlife Research in Taif, the Prince Mohammed Al-Sudairy Center for the Breeding of Reem Gazelles in Al-Qassim, and the Arabian Leopard Sharaan Nature Reserve in AlUla are among the existing reserves in the Kingdom that have helped endangered species to flourish.

“Tremendous efforts are needed to protect and conserve species of conservation concern, mainly to ensure that these species are well protected against both natural and human-induced threats,” a spokesperson for the KSRNR told Arab News.

“Preliminary results of such programs and efforts are promising, such as recording signs of acclimatization of individuals and the success of having newborn individuals in the wild of the reintroduced species, including the first oryx to be born in the wild in nine decades.

Despite recent efforts by governments and agencies throughout the world to conserve ecosystems, the pace of wildlife and habitat loss is staggering.

“The main obstacles facing the animals are habitat degradation due to overgrazing of local herds of livestock, mainly camels, as well as hunting,” the KSRNR spokesperson said.

“The Royal Reserve’s specialized team is tackling these issues of deteriorating habitat by conducting restoration programs, as well as using advanced methods and technology for monitoring and protecting animals.”

Marine habitats in particular are suffering as a result of pollution, acidification and rising temperatures. Australia’s Great Barrier Reef, for example, has lost more than half of its corals as a result of rising ocean temperatures in recent years.

Meanwhile, marine life is disappearing rapidly around the world, with whales, dolphins, dugongs, sea turtles and many species of fish disappearing at twice the rate of species on land.

The Farasan Islands, an archipelago off the southwestern coast of Saudi Arabia, is feted for its unique biodiversity. It is home to more than 230 species of fish, a variety of coral reefs, and several endangered marine animals, including dugongs.

Since 1996, the area has been a protected nature reserve covering 5,400 square km and it was recently added to UNESCO’s World Network of Island and Coastal Biosphere Reserves.

It is a sanctuary for the Kingdom’s largest colony of edmi gazelles, which are endemic to the region, as well as white-tailed mongoose and several species of rodent.

Its remoteness has, to some degree, helped preserve the area and its animal inhabitants. However, with new coastal developments, passing ships and warming waters, certain land and marine species are now in decline, inspiring the efforts to preserve and restore marine ecosystems.

Ten billion mangrove trees will be planted across Saudi Arabia as part of the Saudi Green Initiative, which was launched last year to tackle climate change, reduce carbon emissions and improve the environment.

Nature reserves are contributing to the Kingdom’s afforestation initiative. KSRNR is working to recover 90 percent of degraded habitats by 2040, with ambitions to plant 70 million native wild species seedlings.

“KSRNR is planting 1 million native plant seedlings in 2022,” the spokesperson said. “This plantation target will be doubled during the year 2023 to reach 2 million seedlings planted.

Despite these sterling efforts, and the work of conservationists elsewhere, experts warn that more needs to be done, both in the region and globally, if more of the breathtaking variety of animal species with which we share our planet are to avoid extinction. 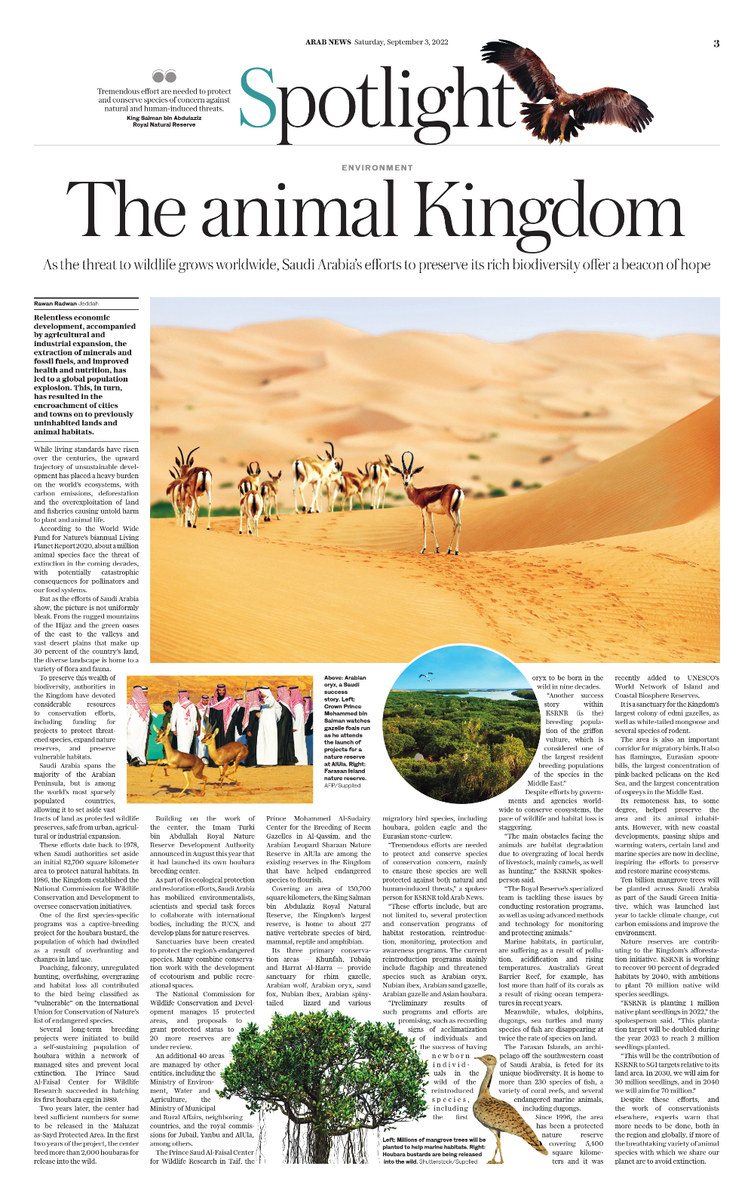