DEA agents seized more than 3,500 pounds of methamphetamine and 145 pounds of cocaine from a stash house in Norco, California, this week.

The drug bust marks the largest seizure of meth by the DEA’s Los Angeles field division in history. 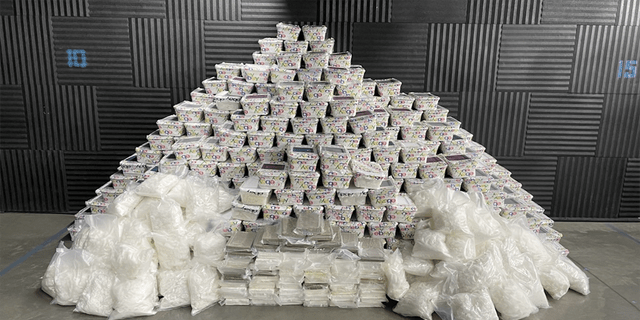 The DEA seized more than 3,500 pounds of meth and 145 pounds of cocaine from a stash house in Norco, California.
(DEA Los Angeles Division)

Investigators had been monitoring a stash house that they believe is linked to the Sinaloa Cartel, which uses the Los Angeles metropolitan area as a major hub for drug trafficking.

Last month, DEA agents stopped a car that was leaving the home and located drugs in the vehicle. A subsequent search of the garage in Norco uncovered roughly $33 million worth of drugs.

Pictures released by the DEA show what appear to be bricks of cocaine with “Jaguar” imprinted on them.

“This massive seizure likely saved lives and prevented the Sinaloa Cartel from doing business and profiting on the lives of people in our communities,” Bodner said.

Paul Best is a breaking news reporter for Fox News Digital and Fox Business. Story tips and ideas can be sent to Paul.Best@fox.com and on Twitter: @KincaidBest.